The ballads lie. Robin Hood, the Bold and Brave Outlaw of Sherwood Forest, is cowardly, spineless, and a girl.

Robyn unwittingly starts the Robin Hood farce when she is mistaken for a male while saving her friend, Marian, from two foresters. Forced into hiding, Robyn unwillingly collects “Merry Men” while grudgingly robbing from the rich fools that wander through Sherwood. What starts as small scale robbery blows up into complex heists when Little John and Will Scarlet join her team, and the idiotic Prince John and his legion of soldiers comes to town. However, Robyn can’t stop the theft—not when King Richard is being held ransom.

Cowardly Robyn’s best chance to raise money for King Richard’s release is to rob his brother, Prince John. Will she survive the heist, or swing in the gallows?

This was a fun, light-hearted read. I enjoy Robin Hood retellings and I liked Shea’s twist to this one. It was also quite amusing and as with Shea’s other books, it was a clean read. However, it did not grasp my interest (DNF 62%). KM Shea is an excellent writer, but for me, this one didn’t quite hit the mark. I think, perhaps, it would be a fantastic read for younger girls around the age of 12. 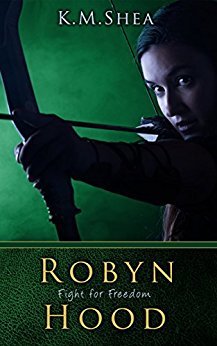 The plot starts out rather fast-paced but slows in the middle and there are a few unrealistic points; for example, the fact that everyone believed that Robyn was a man. Although the writing was at times witty, there were numerous typos and it wasn’t quite as developed as Shea’s other works.

Altogether, this book was okay, especially for a free e-book. However, I will not be reading book #2.

Do you have a favorite Robin Hood retelling? 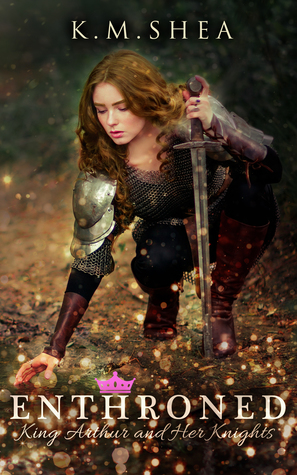 First off, KM Shea is amazing. Her books are clean, fun, and exciting. If you have not read any of her books yet, please do! She’s a super talented writer.

Now, on to the review…

I loooooved the concept of a female King Arthur. Way to be original, Shea. The time travel element was compelling too and made for some interesting flourishes.

I wish I could leave the review at that, but I want to be honest. So here goes. Britt was a fun character; however, there was little development and her reactions weren’t in depth. It felt like I was just skimming the surface of who she was. Merlin… In this rendition, he’s supposed to young and handsome, but I had a really hard time getting passed an old man wearing Gandalf robes. This could have been a clever twist, yet again, there wasn’t enough development.

While the plot had great potential, it was rushed. I felt like someone had pressed fast forward and I was only getting vague images of the real story. The writing was pretty good, although a little grey compared to Shea’s other works. Lastly, there were a few things that were unbelievable. Like the fact that Britt is mistaken for a boy, plus her exceptional martial skills…

Altogether, I was disappointed by this story, but since I got books 1-3 for free, I might read the next two. And who knows, maybe I’ll like them better. 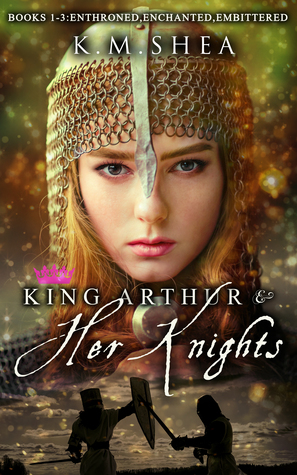 Have you read this book? What are your thoughts? Please comment below! I’d love to hear from you! 🙂 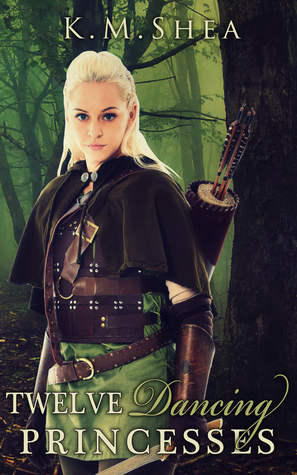 Where do I start with this book? Do I start with the amazing characters? Or the gripping plot? K.M. Shea has never failed to captivate me and this time was no different.

I was drawn in at the very first paragraph – I loved that Shea just dropped me into the story. Yet, it wasn’t confusing, it began clearly with a simple action scene that introduced me to the characters and setting. The tight kinship within Band Gallant was admirable and I thought the members complimented each other. For some reason, groups like that always get me – the devotion but also playfulness makes me smile. Now to Quinn… She was fantastic. Probably one of my favorite heroines ever. Wait, what?

Yes, one of my favorite heroines! She was brave and faithful and kind and, and… She was amazing. She made mistakes, she wasn’t always perfect, and that made me like her even more. Then there was Emerys. Often the male love interests are portrayed as rather flawless, but I think what made it different with this one, was the way he interacted with Quinn. He teased her in a down-to-earth sort of way and she fired right back at him. Plus, the animals he turned into were quite humbling. And actually, that surprised me because he was often in animal form and so there wasn’t a lot of, “His sculpted muscles were clear beneath his shirt,” or “I laid my hand on his rock hard chest,” or “his starry blue eyes stared down at me.” (cough, gag, cough) you get the picture. So ya that was a nice change.

Now that I’ve ranted about the characters forever, let’s move on to the plot. Umm YES.

What a twist on the Twelve Dancing Princesses! Not what I was expecting, but I definitely loved it. The only thing is that perhaps a tiny bit more complexity would have been nice. But maybe that would have taken away from the beauty of the story. I can’t entirely say for sure, but I am definitely hoping for a sequel.

Alright, so the writing. Can’t say too much, it was nice; although, I would have liked a little more figurative language. It was rather plain, which is fine, it made it easy to read, but I didn’t walk away thinking, “Wow, that was beautiful.”

Finally, it was a clean read and I absolutely love that! I was able to thoroughly enjoy it and feel good about reading it. So, as with all of Shea’s writing, I definitely recommend it.

Have you read this book? If you have what are your thoughts?

That’s all I have to say for now.

Thanks for the read.

P.S. Check out my book Ashes of Glass. It’s now for sale on Amazon! 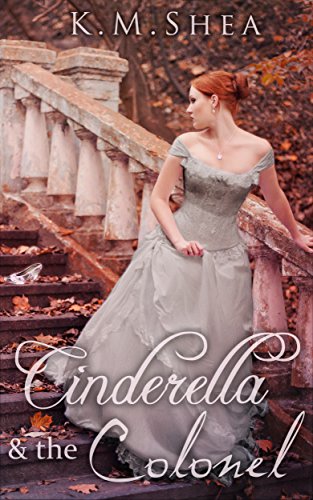 “A gentle word, a smile, an act of compassion, these are the things that can turn hate to love,”

K.M. Shea did it again. I was totally and absolutely captivated by this Cinderella retelling. I had an hour-long car ride ahead of me and was looking for a book to read. Since I loved Shea’s other books, I decided to give Cinderella and the Colonel a try.

I was hooked from the beginning. Cinderella was a strong, independent, honorable, and brave character. It was so touching how much she cared about her servants. Sigh… she was a lovely character. Sometimes I feel like characters are too perfect like they don’t have any flaws, but Cinderella didn’t make me feel like this at all. However, one thing I didn’t care much for was her name… Yes, I know, it’s a Cinderella story, it’s not a terrible name, etc. But it felt kind of lame, like why Cinderella? Even Ella would have been better. Maybe it doesn’t bug other people, but I didn’t care for it. Another strong character was Friedrich. His introduction into the storyline was a bit creepy and I was like, “who is this weirdo?” But he ended up being really sweet and I kinda fell in love with him too…. 😏

As usual, I really enjoyed Shea’s writing style. Beautiful, but not weighed down by figurative language and such.

Moving on to the plot. It was a nice pace, not too slow and too fast, until the ending – I wish that had been dragged out a bit more. You don’t want the ending to go on forever, but after the ball, it felt like someone hit fast forward. It could have been worse, for sure; however, I would have preferred another chapter or so.

Altogether, though, I loved it. I definitely recommend it, it’s a clean read that is exciting and enjoyable all at once. Maybe I have a soft spot for Cinderella stories because I’m writing one (Ashes of Glass), but despite that, you should still read it.

“Forgetting is not at all what forgiveness means.”

“Stand proud, Snow Queen. You have no equal.”

Within two days of finishing Heart of Ice, I bought Sacrifice so I could continue the adventure of Rakel the Snow Queen. And let me say right away, I was not disappointed.

There was a lot of character growth, which was amazing especially since it was the second book. Also, the love story was super sweet. At times, I found myself with a silly smile on my face as a result of the relationship between Farrin and Rakel. It wasn’t sappy or cringe-worthy, it was just really nice and beautiful. And unlike the first book, Farrin is featured quite often with Rakel as well as by himself which helped me get to know and understand his character better. Likewise, there is a closer view of Tenebris, the villain. A few scenes that showed how he treated his soldiers really made me dislike him and want Rakel to defeat him. Further, Rakel’s inner struggle of whether or not she was becoming like Tenebris, created some tension which was good – it kept her character interesting and humble.

One small aspect that I didn’t enjoy, was the way the plot was laid out. It seemed like a continuous cycle of battle, rest, battle, rest, etc. Further, the dialogue between the fight scenes sometimes seemed a little unnecessary, but this had definitely improved since the first book.

“It seems you didn’t understand me,” Rakel said, adjusting her grip on his hand. She had to spit the words out around the pain that tore through her. “When I say that love is pure, I mean it stands unrivaled in its power.”

And finally, the ending… I loved it! Way to go KM Shea, you nailed it. Rakel made an honorable decision that made me respect her immensely. It also proved more than anything else that she wasn’t like Tenebris.

Overall, I highly recommend this book (and I suppose you can’t really read this book without reading the first one so I then recommend the first book too!). I really enjoyed this series by KM Shea and I am excited to discover other jewels she has created.