“Indifference and neglect often do much more damage than outright dislike.”

This has got to be one of the biggest books I’ve ever read. It was mammoth size! (Over 200,000 words) So where to begin…

“Just because you have the emotional range of a teaspoon doesn’t mean we all have.”

I was thrilled to join Harry, Ron, and Hermione once again. I’ve been reading a bit about what makes the Harry Potter series so compelling and a lot of people name the characters as a key component. I have to say that I agree with them. The golden trio was, as always, absolutely charming. From Ron’s reaction at discovering that he was a prefect, to Hermione’s Christmas gift of homework planners, to Harry’s dedication to the DA, I was spellbound. And I know you will all agree when I say that Umbridge was absolutely horrible. Rowling did a really good job of portraying this and making me want to just reach inside the story and ring of Umbridge’s neck. I have to admit, though, that this one was a hard one to read in terms of Harry’s ever-shifting moods. He was angry a lot of the time and now I know why, but it was a little frustrating to read. I really wanted to tell him to just calm down and take a chill pill.  We’ll see what he’s like in the next book.

The plot of the Order of the Phoenix was interesting as well in that I felt it didn’t have a crystal clear end goal. With the others, usually there was something that the characters were working towards throughout the entire book (i.e the finding the Philosopher’s stone, discovering the location of the chamber of secrets, surviving the Triwizard tournament). Rowling still made it work, though, and did an excellent job of keeping things rolling and engaging the attention of her readers. Lastly, I was very much intrigued by Snape’s memory. Up till now, Harry has thought of his father as a great and noble hero, but in this book, he discovered that his father wasn’t all that. I think especially in this book we see Harry step away from the naivety of a child.

I’m looking forward to book 6. Although things are becoming sooo intense, I’m not sure I’ll be able to handle it…..

In this sequel to the Orphan Queen, Wilhelmina and Tobiah must fight against all odds to stop the wraith from destroying both of their kingdoms.

“No matter the masks we wear, we always end up together.”

The character development for Wilhelmina was fantastic. She had to learn what it meant to be queen not only in name but also in action. She was forced to make some decisions that were not at all easy and that her haunted afterward. Despite this, she persevered and always strove to do what was best for her people. Tobiah went through many of these struggles too, as well as grappling between duty and desire. Plus, he had some pretty big secrets he was hiding. The first time I read this a few years ago, I remember being quite shocked. Chrysalis was an interesting addition to this story, but I felt that he was terribly mistreated. Yes, he was made of wraith and he often acted without considering the consequences, but I thought that Wilhelmina could have been a little nicer to him. It felt like she either ignored him or yelled at him.

“Sometimes we hate others for the things we hate in ourselves”

I loved that Meadows finally took us to Aecor. After all the hype around this country, it was great to be there; I just wish there was more time spent exploring it and getting to know the culture.

I also found that the first ½ of the book was rather slow. It felt like they spent a lot of time talking about the problems and not doing too much to fix them. Despite this, I did still enjoy the book overall and would love to read some more by Jodi Meadows.

Lastly, this was a clean read. There was no profanity or sexual content.

“Reasons we should get married:
Because I love you.
We both look good in black boots.
I spent some time without you, and I didn’t like it.
You make me happy.
I make you laugh.
I like the way you fight.
You see through my masks.
I really love you.
You love me, too. (Though you’ve mostly said this while yelling, so perhaps I should have double-checked.)
Army of tiny vigilantes. (I have name ideas.)
Various political reasons that make sense but don’t fit with the theme of this list.
I’m holding your handwriting hostage. You can have it back when you say yes.”

“I felt in this new adventure I was rousing to life again. I was a butterfly, newly emerged from the chrysalis, damp winged and trembling with expectation.”

This was an exquisite tale!

I was instantly struck by the writing. It is so beautiful and deep. Raybourn does not simply tell the story, she paints a vivid landscape. Simply put, it is a piece of art. Also, this story was intelligently written. Either the author is talented lepidopterist like Veronica or she did some thorough research. Further, the author created such vivid characters. In some ways, Veronica was naive and in others, she was experienced. Through it all, she was feisty and absolutely fearless – she faced calamities with cool composure. Her relationship with Stoker was amusing and intriguing. Obviously, it is a slow burn romance, but Veronica keeps him at arm’s distance and treats him with placid indifference. I am very interested to see how this relationship develops… As for the man Stoker. He was a stormy individual who, at first, I was not entirely drawn to; however, as the story progressed, I found myself learning to like him. 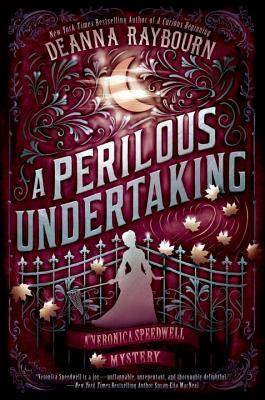 “I abhorred weakness of any kind but most particularly in my tea.”

While the plot was entertaining, I found that it was rather bogged down by dialogue. Stoker and Veronica talk so much that it became exhausting. Yes, it was elegantly written, but it was excessive. Also, this was not a clean read. There is mention of crude language, plus some that is written out and while there are no explicit scenes, it is alluded to and Veronica is a woman of loose morals – her trysts with foreign men are frequently mentioned.

I do believe, though, that I will read the sequel. I am curious to where Veronica’s adventures will lead.

“That is the hallmark of a good partnership, you know – when one partner sees the forest and the other studies the trees.”

P.S. Aren’t the covers stunning?!? I am very much in love with them. ❤

Dear People of the Blogging World

As is often the case, this was a Value Village find. I read the synopsis and flipped through the book and for some reason decided to buy it. Usually, I don’t care for historical fiction, but as I finished the last page of this book, I realized that it was different…

The prologue was prettily written and definitely snagged my interest. I remained captivated throughout Darya’s journey; even though, the pacing was not what I am used to. Most of the young adult books I read are fast paced adventures that show only a few months of the character’s life. But since Linda Holeman began the story with Darya at a younger age, I felt like I got to know Darya quite well. This journey with Darya through a few years of her life also showed me the way she changed, the way she matured. This was a lovely aspect to the story and reminded me that slower paced novels are nice too.

Now the style of writing… To me, it came across as quite an advanced and developed form of writing. It wasn’t just simple sentences and words, it was more complex than that. You really have to be willing to allow yourself to be engaged, to think, when you read this book. (Which isn’t at all a reason not to read it!) I suppose I’m just trying to say that the writing is rich and beautiful.

One thing that definitely fascinated me, was the culture Darya grew up in. It’s so different than the western culture I know. There were parts that had me frowning at it, but there were also things that really got me thinking. For example, in that culture the mother-in-law is someone who the daughter-in-law respects, loves, and takes care of. When I first read that I was like, Wow. That doesn’t happen where I live.

Moving on to the characters… Darya was a beautiful flame, she was strong and brave yet she had pride and honor. However, there was one big decision that she made which I completely disagreed with. (If you read the book you will know exactly what I mean.) Just… Seriously, Darya? You couldn’t figure something else out? Did you really have to stoop that low? Sorry, I won’t rant anymore, but that one decision ruined an otherwise fantastic book. Yes, I just said that. For me, the book lost its golden sheen when Darya made that decision. Anyways, the character David was really kind and valiant. He was an honorable man in every way. But, he didn’t really have very much dialogue and always seemed a tad distant. At the end of the book, I didn’t feel like I knew him very well. The last character I want to mention is Mr. Bull. I hate him. There isn’t a nicer way to say it. Honestly, I have never disliked the villain of a book that much. I’m not entirely sure why I loathe him more than other villains, maybe it is because he did what he did for his pleasure, not for power like most other villains. Whatever it was he is officially my #1 most hated villain.

In conclusion, I did like this book. I think it is an 18+ book, though. There was no profanity and the sex scenes were not overloaded with gross details, but they were there; plus, some of the morals aren’t exactly the best. So I think overall I’m gonna say, I enjoyed Holeman’s writing style and was given many things to ponder.