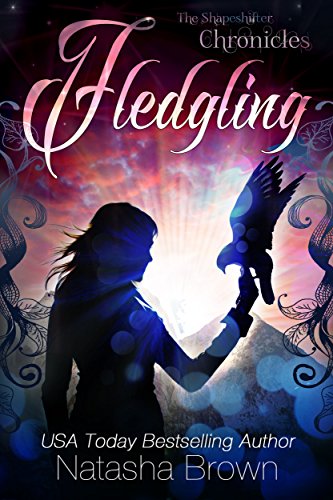 Fledgling was an enjoyable read. I liked Brown’s take on the shapeshifting world. Wait a minute. Shapeshifting world, you mean werewolves? No, not werewolves and that’s exactly why I liked her story: it was not what I was expecting.

The main character, Ana, was sweet and brave despite the difficult situation she was dealing with. Brown did a wonderful job making Ana’s feelings about her health realistic. The protagonist, like any other teenager, wanted to be normal and to fit in with the other students. Chase, on the other hand, was okay. I didn’t find that there was tons of depth in his character. And the relationship… It started way, way too fast. It felt like in a week they were dating. Yeah, it happens sometimes, but for me, it would have been a little more realistic if the beginning stages were drawn out a bit longer.

As far as the writing goes… The way Brown described the settings was beautiful and detailed (although not overwhelmingly so) and made me feel as if I was in that place. I did find, though, that the first two chapters were written very neatly and elegantly, but that this articulation was lost a little in the remainder of the book.

Another thing I enjoyed, was that it was a clean read. There wasn’t any swearing and although there were a few kisses, the couple didn’t sleep together.

Lastly, and this is a rather large elephant in the room. Ready? Maybe you want to cover your ears. Twilight. I’m not going to hate on the author about this because she did have some really cool original ideas. However, I was reminded often of Twilight. And I will leave it at that.

Altogether, this was a nice read and I recommend it to those who like ya paranormal romance.